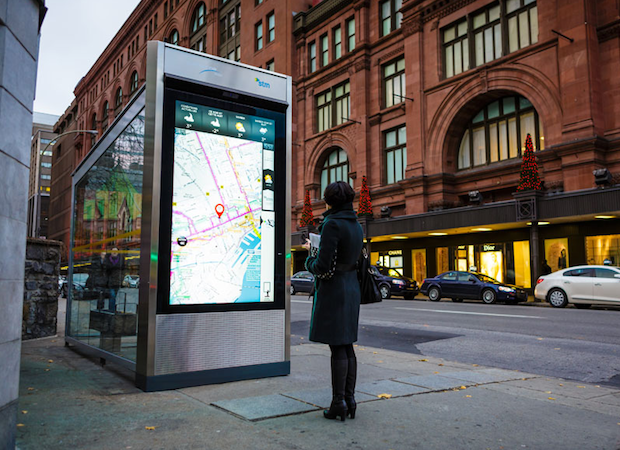 The past few weeks have seen the arrival of new bus shelters on the streets of Montreal. They are new, they look good, but most importantly they are interactive. We’ve tried and tested for you the communication, gestural, and ergonomic aspects of these 84 inch screens. They are equipped with gesture recognition cameras developed by Numérix 3D with Québecor Média and the STM.

It has probably happened to you: waiting in the snow at -20°C, not knowing when the next bus will show up. Or, you get off a bus and don’t know in which direction you should start walking. These experiences may be a thing of the past, at least around a few dozen stops on the STM network. The new interactive bus shelters show when the next bus will arrive, the current weather, a map of the area, news, and of course – interactive advertisements.

From our point of view, these new bus shelters are a really good initiative. But unfortunately, passengers have habits that are not easy to change. After some field observations, we have noticed that only a few users interact with the screen. Because people are either inside the shelter or in-line in front of the shelter, they aren’t in an optimal position to see the interactive screen.

Moreover, we realized that most passengers do not realise the screens are interactive. Many were watching us with curiosity as we had ​​our first interactions with the interface, with our arms in the air and serious faces. Some seemed interested, but would they use it under normal circumstances?

Here are our observations, broken down into a few points:

In winter, it works!

No need to remove your gloves. With gesture recognition we were able to interact, regardless of the way we were dressed, even at -30° C with windchill.

Time of day, next bus arrival, and a map. Who wouldn’t need these things?

We observed that it was easy to learn how to interact with the screen – a giant cursor is moved by making gestures with your arm. But beware: you must be at the proper distance and mustn’t be surrounded by your friends, otherwise the system doesn’t know who to watch!

These ads have the attention of a somewhat captive audience! That said, we look forward to see how advertisers manage to push the boundaries of the medium to make more interesting interactions. The advertisements in the La Presse + app immediately come to mind.

It’s a great experience discovering cultural events nearby, or learning that the museum two blocks away offers free admission for the day. We didn’t come across location-based information in our tests, but the concept remains very promising!

Some areas for improvement:

From our point of view, it is difficult to know that the screen is interactive without being close enough to trigger the animation. It seems unlikely that a person would decide to approach the screen that closely if they don’t have the intent to interact with it. This may explain the perception of some people who mistakenly believed they were looking at a non-interactive digital signboard.

Additionally, people’s habits are hard to change. When we see an interactive screen, we immediately have the reflex that we have with our smart phones and tablets: touch.

We saw people try to move the cursor by touching the large display surface. Since they weren’t at the appropriate distance, it didn’t work well. We even saw people use gestures to mimic the action of pushing large buttons – this often moved the cursor out of the target zone, instead of confirming the intended action. It is important to communicate the interaction “rules”.

Some non-intrusive instructions would encourage passengers to interact with the screen in appropriate ways.

Presentation of information on the screen

How the information is displayed can sometimes cause problems for users.

The most relevant information for the passenger was displayed at the top of the display panel. Given the need to be close enough to interact with the screen, it was necessary for them to raise their head into an uncomfortable pose to read this information. This was especially a problem for shorter passengers!

Also, posting the scheduled time-of-day the next bus will arrive rather than the number of minutes until arrival forces people to do the math themselves. And since not all schedules are presented on the screen at one time, the information will sometimes disappear before it can be cross-referenced.

Place the most relevant information at eye-level. Present the time-to-wait before the next bus arrives.

It is important to reassure someone taking a bus for the first time that they will end up where they intend. When we tried the No. 161 bus stop at Rosemont Metro station, the map allowed us to view only part of the journey. It was not possible to move the map to see the road ahead. It was also difficult to identify the path that our bus would take versus other routes on the map.

The navigation system presents some difficulty. Avoid sudden movements, as the cursor is very sensitive and inaccurate. People must raise one arm at a time and it is important to ensure that a purse or bag is not placed in a way to interfere with the system. To select an option one has to completely stop moving for several seconds, otherwise the action is not recorded.

Evaluate navigation models that do not require precision. For example, sweep hand horizontally or vertically to move from one screen to another.

In conclusion, we wish to acknowledge the innovative work done by the STM and its partners. This bus shelter has not only been designed with the idea to launch Montreal transport in the 21st century, but uses an evolving and sustainable platform.

We can’t wait to see the integration of two important features: real-time arrival information (once GPS is installed on buses), and the display of bus and Metro network status (informing passengers of outages). STM passengers will then be able to take pride in using a world-class service offering.

This blog was written in collaboration with Louis-Thomas Plamondon