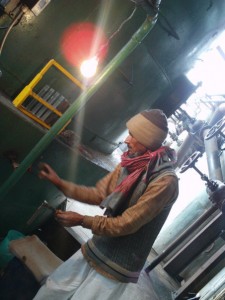 I recently returned from a month-long foray through India.  As the country from which both of my parents immigrated to Canada, the trip was enlightening in many ways.  Among the countless revelations lay a few economic and technological insights which I thought might interest our readers.  Are you a global traveler?  These thoughts are obviously anecdotal and I welcome your comments from your own experiences in other parts of the world.

While the major cities of India have become increasingly “westernized” and the country’s reputation as a hotbed for technology grows, the proliferation of technology has reached beyond the cities into rural villages and remote farmland.  Let me paint you a picture: imagine a young indian farmhand, shirtless, his legs draped in a cloth dress.  He’s riding one of his family’s bulls, slowly bringing it to the other side of the village.  He’s got a stick in one hand, which he’s using to whack the bull for navigation, and a cellphone in the other.  Despite my limited understanding of the language, he’s clearly discussing farm work.  This was a bold image I witnessed first-hand on a rural farm village in northeastern India.  This is a sugar plantation with no consistent residential electricity, no water pipes or hot water, and two small mobile phone towers.

The third world is collectively skipping 100 years of technological development.  While we painstakingly iterated from basic gas-guzzling cars, rotary phones and vaccuum tube computers to the current technological world, the fruits of our advance have globalized.  This child went from having no phone or communication lines whatsoever, directly to a mobile phone.  In the near future, I can imagine these third-world children engaging with technologies that access e-mail and web browsing (perhaps the iPad is a step in this direction as a simplified internet interface?).  Many talk of the “digital divide” as an emerging problem in our already-imbalanced world.  I would argue that this gap is destined to be filled through the globalization of our most modern, efficient and cheap technologies.

What does internet access mean to rural villages and third-world citizens?  Despite attempts to create structured and organized education systems (I visited several rural Indian schools), there is a clear lack of dedicated teachers with international-level skill and knowledge.  However, stories of intelligent people emigrating out of the third world have spawned a generation of young rural kids with intelligence and a passion for education which is simply unparalleled in the developed world.

The fire I saw deep in the eyes of an 8-year-old village girl who studies english and biology textbooks twelve hours a day of her own volition is a testament.  Her clear and firm intention to “become a doctor and move abroad” is in stark contrast to what interests the 8-year-olds I’ve met in the developed world.  Her smooth conversation with me in a self-taught english represents a calculated move from her remote village to the world stage.

As mobile technology develops and these young rural children get access to the wealth of information on the internet, it seems possible that this feverish appetite for education will be satisfied through self-directed learning.  The untapped potential of the intelligent-yet-uneducated workers I met at the nearby sugar mill could cease to be a reality with the advent of information technology.   Especially in the midst of this past decade’s collapse, the economic implications of a techno-savvy, self-educated and passionate third world are astounding.

How can we prepare for this onslaught of new talent?  First of all, the selfish question: how can we stay competitive by highlighting what makes our skills and experiences unique?  More importantly, how can we alter our economic systems and requirements to evaluate and embrace these talented people, knowing that they might be able to help solve major global problems despite not having an official degree or diploma?

I’m wondering what could make this talented and electronically-trained diaspora move back to their roots and land and take care of those who are less talented but yet, still craving for knowledge ?

It’s one thing to have the intellectual possibility for self-education, but who will take care of the ones for whom innovation (not in terms of technology but in terms of content) is not that accessible?

I wonder how much of his average wage was spent on that cell phone plan. Is it still a luxury item or has it become truly affordable? That question aside, I agree with the general tone of your article. Easy internet access for rural communities could provide huge opportunities for self-education. I simply hope that in time these highly motivated individuals don’t become as complacent as many in our culture has become.

Some interesting and frightening facts in here… 10 things you should know about mobile in India.
http://mobithinking.com/blog/ten-mobile-facts-about-India

Anonymous: “Going back” is a really interesting element for people in this situation. I can’t answer that question, but I can tell you that my trip itself was an example. Something my parents did obviously instilled me with a desire to go back and connect with my ancestors, right? 🙂

Josh: Clearly the cellphone was a luxury item in that remote village due to the extreme poverty and lack of electricity, but in bigger cities it is quite affordable. It makes economic sense; you can charge a lot less for a cell-phone when population density is so high (each mobile tower reaches many more people). As for your second point, it’s possible that with success comes complacency, but maybe they will learn from our mistakes and somehow avoid it?

Nice post Jay. I have run rural user research projects in India and could not agree with you more.
Rural India has missed the PC revolution alltogether and have directly jumped onto the Mobile (Handset) bandwagon. The mobile phone in rural India is not only seen as a tool to communicate but a “way out”.
Education through this medium is still an unexplored territory but definitely the future.