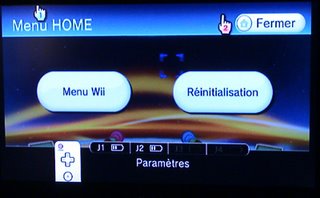 Video Games: how to spoil the playing experience by forgetting usability.

During the holidays it is good to get together with friends and family around a video game console and have a hearty laugh. I had the opportunity to play a bit during the break and, force of habit, found myself evaluating the quality of the different games I tried with an eye on their usability. And once again I was surprised to see seemly small details having a strong effect of wearyness on the players. Take for example Super Monkey Ball: Banana Blitz, compatible with Wii. The game has been around for more than a year but it is a perfect example to illustrate what I mean. I now unveil some of the problems of this, otherwise enjoyable, video game.

Problem I: Adding on other players.

Initially, only one player can play Super Monkey Ball, and the game does not easily indicate how to add additional persons in multi-player mode. To achieve this one must go into the Wii menu. In other words, one must exit the game (although not entirely) in order to activate more controllers: and all this from an obscure sub-menu requiring a strangely labourious procedure considering it to be a context of “playfulness.” It is simply impossible to figure out how to add players if you have not read the instruction manual or if you did not already know…Yet this common task is treated with far more success in other games, such as Wii Sports for example, where the activation of controllers is explicitly displayed by way of a tag on the screen found in the main menu.

Once the controllers have been added, the characters selected by each player are chosen from a kind of carousel, where the Wii handle is used as a sort of rotating button. That is to say, it must be pivoted on its axis to choose the desired character. One, the metaphor of the rotating button, in principal a good idea, is poorly served by approximate movement, which makes it quite easy to sail over the desired choice of character because the controller has been rotated too far. Two, it is quite difficult to determine your current selection when other players are performing the same maneuver simultaneously, because the colour ring which indicates your selection does not include your position (i.e., Player 1).

When selecting a character, right-handed players click on button A and left-handed players on B. This may seem simple enough but the instruction that indicates this option is inserted amongst a sequence of other instructions, in three parts, at the bottom of the screen, and repeated cyclically. It is therefore possible to never see this message if you are not paying attention to it, and you do not understand that the message changes every five seconds. Being left-handed myself, I did not discover the left-handed mode option until I had played several times.

Problem 4: Instructions unavailable while performing the task at hand.

Super Monkey Ball multi-player mode offers fifty some-odd games, all in the true spirit of “party games,” a potpourri of micro-games designed for fun amongst friends. For each game, Super Monkey Ball displays brief instructions just before advancing to play mode. Now, these are at times impossible to understand without having already played the game. The developers have not thought to offer the option of reading instructions in context, that is to say during the game, in Pause mode. I find this unfortunate because many of the games prove to be incomprehensible and are thus abandoned after only one try.

Problem 5: Lack of an emergency Exit

In play mode it is impossible to exit a game, once in play, to change to another game. Players must either see the game through or reboot the software to choose a different game. This is a major problem because it seriously affects the user’s sense of control. Being confronted with this arbitrary constraint only serves to provoke frustration.

In play mode it is impossible to exit a game, once in play, to change to another game. Players must either see the game through or reboot the software to choose a different game. This is a major problem because it seriously affects the user’s sense of control. Being confronted with this arbitrary constraint only serves to provoke frustration.

With this kind of game the competitive spirit of the players is such that they are going to want to measure-up often to the same micro-game: either to confirm their superiority, or regain their lost honour, or simply to repeat a terrific experience. Astonishingly, Super Monkey Ball does not offer a shortcut, at the end of any game, to replay the same micro-game. One must: 1) sit through the medal awards ceremony again (this cannot be interrupted), 2) return to the game selection menu and again choose the same game (amongst a list of 50 games and with the same button-carousel interface mentioned earlier), and 3) re-read the micro-game instructions before advancing to the game…A tedious process which largely reduces the chances of the software being used again.

It is obvious that the producers of Super Monkey Ball, despite their best intentions, did not succeed in making a “usable” product. It is constant exposure to interface gaps and weaknesses that largely reduces the game experience and explains, in part, why players abandon, little by little, multi-player mode. And it is unfortunate too because the game itself is efficient and fun.

In a flourishing industry where the clientele is increasingly diversified and demanding, game developers must consider the usability aspects of their products. A player free of all “bother” will have more fun and the experience will become more memorable for all the right reasons.

And how about you, have you ever been confronted with usability problems while playing a video game? Share your experiences with us. Happy New Year in 2008!