This week we got to take a look at one of the most surprising things out of last June’s Google I/O conference: Google Cardboard.

In case you’ve never heard of it, it is a small cardboard contraption, made out of cardboard, a pair of lenses, a magnet and an NFC tag that uses an Android phone (we used a Nexus 5) to create a virtual reality (VR) headset. It is presented as a way to quickly prototype VR experiences using a new set of APIs that google created along with this project and to explore possibilities with the medium. It is accompanied by an application that offers a series of technology demos, letting you explore Versailles, watch youtube videos, an animated movie, explore Streetview and fly around in Google Earth. 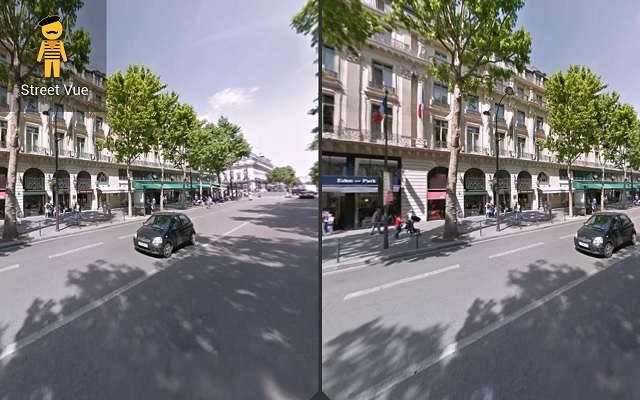 The street view app moves you through a series of streets, letting you stop to look around.

It is surprisingly fun.

We were all very delighted by the initial experience, which left many of us with a big smile. Thanks to the NFC tag, just sliding the phone into the cardboard launches the application and gets you started  in no time. This makes the experience very easy to get into and to share it with someone else.

Once you bring Google Cardboard to eye-level, it’s fairly easy to become immersed in the environment shown to you. You pan through scenes using your head to navigate. There’s also a small metallic piece on the side, actually a magnet that the phone’s magnetometer can track, to let you “click” what’s in front of you. It gives off an impression similar to and old view-master (wiki link). Tilting the Cardboard to the right will “back” out of of the current screen and returns you to the cardboard app main screen.

Even if it’s running off a normal phone, it follows head movements pretty well. Although some of us felt a bit nauseous after a while.

There’s a very clear feeling of immersion with it, especially in the Google Earth section, which lets you fly around cities, between buildings and throughout the world.  Flying around in large cities  like New York, is a blast! Looking up displays a “fly into space” option, which let you jump from one continent to the next. The movement made it difficult to keep up with where we were in the room, so best to have  someone else around to make sure, you don’t bump into things.

The Cardboard was great. It is very clearly not a “product” but a really first step into VR.

Why is VR important?

There is a huge push coming in about a year for VR. Occulus got the ball rolling a few years ago and has kept a very public view on the development of their goggles. Their acquisition by Facebook will allow them not only to go beyond their kickstarted roots, but towards something that could be a revolution for gaming. Sony and samsung have also thrown themselves in VR, with the Morpheus and the gear VR, respectively.

As the technologies become more available, there’s bound to be a lot of developments in this field. Compared to what VR technologies that were available in the 90’s could do, the current batch of systems seem to have achieved to match the experiential requirements to create a real feeling of immersion and to reduce lagging issues, which can cause nauseousness. They also benefit from mobile technologies, meaning that they are expected to be much more affordable than previous iterations.

How does UX fit into all of this?

From a UX point of view, VR is a field that makes new and exciting experiences beyond what is currently available for  gaming and simulation possible. Imagine virtual meetings, training simulations and data visualizations explored as spaces and other opportunities that could emerge from these technologies once they become readily available.

However, while the capacity to immerse someone in these new worlds, there’s a lot left in defining how we interact in these spaces. While there are some similarities with the work need in Augmented Reality (AR), such as embedding information within space and working within the context of the user, Virtual Reality has the drawback of disconnecting you from your body, a crucial element in defining our interface in the real world. Without a visual reference, such as a controller, figuring out how to interact with these new virtual systems could have a huge impact on how this technology.

There’s already UX work underway to  define those experiences, but its  still in very early stages. It’s is very clearly still a very specialized type of interaction with some limitations. Things are evolving very differently in the virtual interface and the hardware side of things.

From an interface standpoint, available games are using the center of the viewport to control what is being triggered and head orientation to control the virtual camera. However, more complex interactions are relegated to hardware controllers.

From the hardware side, things are still up in the air. While regular game controllers are useful for movement, they have too many buttons to be used without requiring users to look at them.. Motion tracked controllers, such as the Wii Remote or the Sixsense Hydra could be a better solution as they offer gestures that can be closer to the interactions we’re used to. There’s even an entire treadmill that is specialized in VR mouvement, called the Omni, for those who want to run around in virtual environments.

It’s truly a sector for innovation and exploration and the google Cardboard serves as a great gateway into VR and the possibilities it holds. As VR equipment evolves, we believe UX could shape this new sector and set standards in how we use computers and in exploring new grounds.