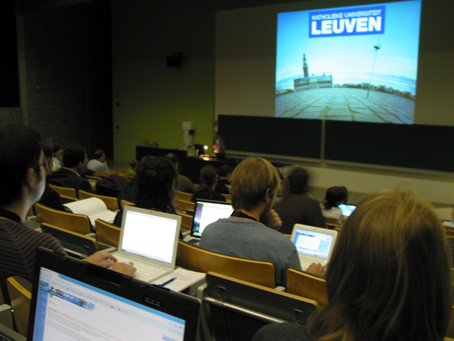 SmartTV: sooner than we think?

I wrote up a brief report on the EuroITV conference, held in Leuven, Belgium from 3 to 5 June, where Jay Vidyarthi and I presented.  The conference focused on the state of technological advance but also consumption trends guiding the TV of tomorrow.

It is becoming increasingly clear that the paradigm of television as we know it will drown, or at least significantly evolve.

We know that very few people use interactive functions on their digital television system apart from the program guide and access to show information.  This lack of interest comes from multiple sources: applications not suited for viewers (more passive, watch in groups), outdated design features, competing with higher technologies (computers, game consoles), limited interaction with the remote.  Many of these obstacles will be overcome soon.

The results of almost all ethnographic studies presented at Euro ITV showed users glued to their TV in a state of relax, escaping extraneous effort.  Developers must consider this aspect in application design.  For example, configuration, settings, and preferences must be minimized, or even shifted to the computer to facilitate more complex interaction (an interface which is psychologically associated with more effort, as well).  The paradigm shift in TV consists largely of the intelligent distribution of interaction between different media (television, computers and Internet, mobile) in a way which takes strengths and weaknesses of each technology into account.  The good news is that this concept now seems to be well understood by the industry.

Great strides have been made in the electronic program guides, simplifying life for TV users. Imagine you turned on your TV one night, tired after a hard day, and it offers a schedule which truly takes account of your taste and context (“it’s Friday, nothing too serious, please.”).  No longer do we need to go sift through a convoluted show schedule.  This will be possible thanks to a smart grid based on the system building a model of you (or your whole family) powered by external data (eg. social networking websites), implicit behavioural data (setting reminders, recording shows, searching content, etc.) and explicit assessments (assessing a film after watching it).  A promising solution in an era of content proliferation where searching for a good shows is becoming more and more of a challenge.

On the other hand, some purely technological developments suggest that the TV of tomorrow might come sooner than we think.  Now that progress in image quality has plateaued, and public expectations have been largely surpassed by available technologies, the hunt begins for other selling points.  TV manufacturers are beginning to incorporate downloadable features to televisions (i.e. installing “Widgets” directly to the system), as has been the case for smart phones for about a year.  Imagine, for example, access to latest Facebook posts, your local weather or the weekly news on demand with a single button on the remote.

According to Rich Ezekiel from Yahoo! Connected TV, who gave an opening keynote devoted to explaining Yahoo! TV’s concept of “Widgets”, 90% of televisions manufactured in 2010 may be connected to the Internet and download such mini-applications.

Remotes are changing, too.  Some models incorporate more and more features to provide greater interaction, such as motion detection and retractable keyboards.  Soon, it might be possible soon to navigate through menus using gestures (like the Nintendo Wii) instead of pressing standard buttons on the remote.

It seems that all the pieces are in place for the advent of SmartTV: not only a mature technology, but also a clearer representation of what people really expect from their televisions.