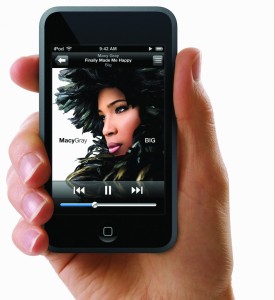 I was completely blown away when I first played around with an iPhone. However, with no desire to subscribe to a 3-year contract, I was relieved to hear that the iPod touch provided the same interface and similar functionality without any monthly services; an iPhone-without-the-phone, so to speak.

While the iPod Touch allows me to connect to my home wi-fi network and play with its supreme functionality, I can’t escape the feeling that Apple forgot to ensure a music listening experience which meets the same high standards. As a company focused on innovative user interfaces, anyone at Apple should have cringed when they read that.

Both of the problems detected involve a failure to capture a music lover’s flow of needs. Here, I would define music lover as anyone who is very particular about music, with urges to hear specific songs and an inability to sit through any song they are not in the mood for. The iPod touch runs into problems with the music lover’s experience when it is resting in the user’s pocket with a music library playing at random. I have identified two specific problems here:

1.  Since I have 6 gigabytes of music randomly thrown into my ears as I walk the streets, it’s inevitable that a song which is inappropriate for the current moment will come on.

With my iPod Touch, I am forced to pull out the device, push a button to activate the screen display, swipe my finger on a slider displayed on the screen to remove the ‘hold’ feature, and finally push the ‘next song’ indicator displayed on the screen. This is not only a more complex user interaction involving both haptic and visual interaction, but pulling out the device itself is also very frustrating when you’re forced to take off your gloves and unbutton your jacket because you’re outside in Montreal when its -30C. Maybe it’s time for Steve Jobs to visit a cold climate!  This problem can only be solved with an external remote which must be purchased separately.

Contrast this to my iPod Shuffle, where i could feel the surface of the player through the fabric of my pocket, hold down the play button to remove the ‘hold’ feature, feel the simple circular button interface and skip the song. I didn’t have to take the iPod out, put my hand in my pocket, or buy an external remote to get the job done. Oh, and did I forget to mention that it was only $40 when I bought it used from the owner of a Depanneur on Sherbrooke St?

2.  I also noticed a second problem when listening to music at random with the iPod Touch in my pocket.  When a song comes on, often I will be inspired to listen to a different, related song. For instance, my randomized playlist might give me “Shoo Shoo Boogie Boo” by Big Joe Turner. I might decide that I’d rather hear “Shake, Rattle and Roll” by Big Joe.

On the iPod Touch interface, there are convenient features which allow me to browse songs from the same album/artist; however, when I select one of these songs, it is impossible to instruct the device to resume my random playlist when the song finishes. I am forced to wait until the song is over to perform this function, forcing me to either hold on to my iPod until the song finishes, or take it out of my pocket again 5 minutes later.

With my Shuffle, the song-selection interaction is obviously limited by the lack of a screen.  Even still, there are aspects to the interaction which are easier.  The Shuffle controls randomization with a physical switch.  I reach in my pocket, turn random play off, switch between songs in the current album, turn random back on.  After playing my desired song, the player will continue its random playlist.

Why are these minor problems a big deal when, obviously, the benefits of the Touch compared to the Shuffle are tantamount?  Here’s where the problem ties into User Experience!  I can’t shake the undeniable feeling that Apple simply released the iPod Touch to cash in on the buzz surrounding the iPhone, without seriously considering its role as a music player, not a phone.  I also can’t shake the fact that I was a victim of this marketing ploy, which severely decreases my trust in Apple products.  That’s a big deal.

All iPods (I think) suffer from the second problem. My iPod Classic does for sure.

I have a number of friends who have an iPhone, and they still choose to carry their old iPod because it makes listening to music so much easier! The iPhone and iPod Touch are not up to par when it comes to music… hopefully Apple fixes this problem when newer models come out.

For winter users of the iPod touch it can be torture as you mentioned on the first point, having to use the tip of my nose to change the music because I dont want to take my gloves out and freeze my fingers just to skip one song.

I have to agree with the others on the shortcomings of the iPod touch. For a company that is so focused on design it seems like missed the boat on this one!

i think your first point can be fix with the new apple earphone with remote and mic. The latest model of ipod touch can work with those and you have a fastfoward and previous song button (or clicking gammick) like the one you got on the iPhone.

For your second point, i remember that something exist on the jailbreak ipod/iPhone that set the music considering your footstep/BMP… so you always walk at the speed of music wich might make that most of the song are good for the moment (walking).

I hope that they will integrated new idea about user experience in the new iPhone 3.0.

P.S: i might have heard that we’ll see more of you in the organisation soon?

This is why I am searching high and low for a replacement firmware for the Touch. My old iPod is now running Linux, and if I don’t like how some tiny detail of the device’s operation works, I can change it.

Yes, I mentioned the earphone and remote in my post. Not the most elegant solution 🙂

It would be awesome to have music match your walking speed, the only problem is the majority of music would be about the same speed (since we’re mostly walking around). I think people like to listen to music to change their ‘speed’ a lot, i.e. if I’m tired in the morning, I might be walking slow… but I want FAST ROCK N ROLL to wake me up!!

And yes, I am certainly interested in lending a helping hand.

Leave a Reply To Cancel