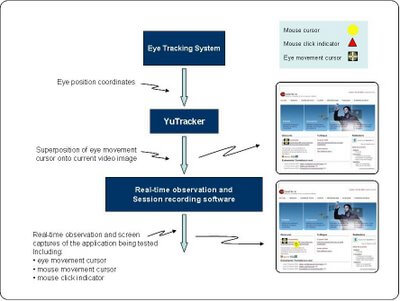 Our usability test lab has a software environment allowing for capture, recording, analysis and full interpretation of observable events during a usability test. Moreover, since we are very interested in user behaviour, verbal comments, facial expressions and eye movements, as well as keeping a record of keystrokes and mouse movement, we also use other software.

In an ideal world, we would like to support our analysis using a single software environment, which would allow us to refine our understanding of user cognitive behaviour in test situations. The ideal solution would:

We developed the first version of an independent software solution, which we named YuTracker, to integrate in real-time the data acquired through the eye-tracking system with the data from our usability testing recording software. We work with faceLab™ (Seeing Machines) as our eye-tracking system and we use Morae™ (TechSmith) as our usability testing observation and analysis software.

The primary goal of our YuTracker test environment is to remotely capture raw eye-tracking data and immediately display the eye movements on screen using a cursor. The superposition of the cursor onto the video image captured by our recording and analysis software offers real-time observations of events and activities occurring during the usability test.

This is YuTracker’s space and test computer architecture:

The room where one finds the participant, the moderator and the eye tracking engineer is equipped with:

The adjacent room where observers can take notes and usability experts can watch the test, is equipped with:

Another room available for clients wishing to observe proceedings and take notes, is equipped with:

The set up described assures maximum performance of the application being tested, a prerequisite for usability testing.

What are the advantages of our solution?

The YuTracker environment makes this type of data interpretation possible at three stages:

We are constantly working towards new means of improving the analysis of the results of our usability tests, as well as trying to deepen our understanding of the cognitive processes of the users who interact with software applications and websites; this initial version is still experimental and we will present significant results in the upcoming months.